Keeping up with life in Pittsburgh

Walking into the main Carnegie Library in Oakland, next to the Universities, the Phipps Conservatory, and a 400 acre park, one can't help but be reminded that Pittsburgh abounds in the basic necessities for high civilization, and even better, it's right on your doorstep. Or rather, to be more exact, it's about 5 minutes drive from home and 7 minutes drive from work. Right on our doorstep, opposite the Spanish immersion elementary school, is the other 400 acre park, where Rolo happily snuffles every morning and fondly imagines that some day he has a hope of catching a squirrel, a bunny rabbit, a chipmunk, or a deer. So far he hasn't come anywhere near, though he has got himself lost in the woods a couple of times trying, given up, and turned up back home several minutes before his chapperone stops calling for him in the park. Which is always a completely harrowing several minutes, as every dog owner knows. Fortunately Rolo only crosses one road on the way, and has absolutely no chance of getting lost on the way back. As well as a symphony, ballet, big theatre district, respectable art and natural history museum, and the National Aviary, all within a 12 minute drive, we also have waterfalls, white water rafting, forests, falling leaves, skiing and snowboarding within an hour's drive. In the spring, for a month or so, the city blooms like no other I've ever lived in. Cherry, apple, dogwood, and many others that one day I'll photograph and publish somewhere online so that flower lovers who would never have dreamt of visiting can put Pittsburgh in their calendar. 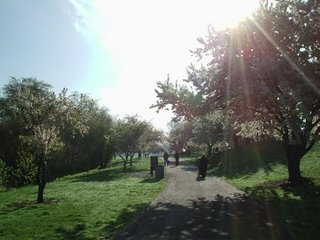 By now the blossoms have given way to leaves and fruits. We're very lucky to have a cherry tree in the garden, and the cherries themselves are now turning from green to pink to red. Hopefully there'll be plenty to share with folk for a few weeks. We've also been working on bookshelves, plastering, painting, rewiring, planting flowers, and generally way too many things to do at once, especially since in the past two or three months I've been travelling to England, France, Italy, the United Arab Emirates, and a trip to Maryland. As well as some chance for holiday, there has been a lot of travel to present some of MAYA's work to communities that are interested in what we're doing, sharing information, reusing resources, merging and combining information in the biomedical domain, building smarter devices, smarter networks, and all that good stuff. If anyone's interested, there are a few papers at my local MAYA webpage, and there will probably be more to come. And if you're more interested in the house projects, here's a picture of the bookshelves (and Rolo and me). 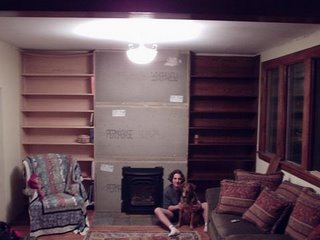 So, as usual, there's a millions exciting, harrowing, predictable and surprising things happening in the world and at home. I just thought I should scribble something down, and for once I thought I should skip politics, science and religion and write about a couple of the things I concentrate on in real life.
Posted by Dominic at 7:08 PM 1 comment:
Email ThisBlogThis!Share to TwitterShare to FacebookShare to Pinterest
Newer Posts Older Posts Home
Subscribe to: Posts (Atom)