Before the Women's March

Before heading to the Women's March in Seattle in a couple of hours, I'd like to share something that happened at work a few months ago. You might need to enlarge the picture, it's a bathroom scrawl, not easy to read. 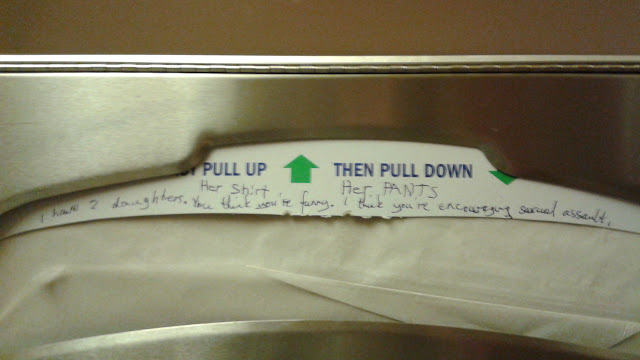 There you go, simple and standard bit of sexist humor, scribbled in a "safe" place where the other people who see it are expected to agree, chuckle, and move on. As you can see, this time I didn't.

After scrawling my angry rejoinder, I shared the picture with my boss and HR rep, who were terrific. We were only a small company sharing the floor at the time, so we hoped it wasn't one of us - and I bet each of the other tenants hoped it wasn't one of them, and the building facilities hoped it wasn't one of them. The other tenants on the floor and building services were notified, and told their employees that the incident had happened, and if any more such behavior was encountered, there'd be a thorough investigation, and a culprit if positively identified could well get fired. Short of taking contortionist handwriting samples from every frequenter of the men's bathroom, I'm not sure what more they could have done. It seems to have sent the right message - at least, we haven't seen anything like this since.

Lots of us, women and men, will go to the march today. That's great. But not everyone can attend. Like a lot of parents, we're fitting it in for a couple of hours in between other commitments today. People have all sorts of reasons for being busy, and if you can't go, don't feel guilty.

But for men in particular, what we do any other day is as important as what we do today. If we see something like the above and think "hey, it's just a bit of fun in the men's bathroom", then we're part of the problem. If we feel that somehow the real men like this kind of stuff, and it's only wimpy men that feel bad about it, then we're allowing ourselves to be part of the problem.

Strong men don't demonstrate their prowess by disparaging women, or anyone else. They don't need to. If you want to be strong, stand up for others. Marching today is a great way to stand up. But there are no shortage or other opportunities, day by day. Most times the media isn't watching - the people watching are our friends, colleagues, and the hundreds of people we encounter in small ways as we go about our lives, in the supermarket, the parking lot, at the bus stop, on the sidewalk.

Men, do your part standing up for women. Logically it's just a special case of "people, stand up for other people", but social constructs make it a particularly important special case. Other people will stand with you given half a chance. Be gentle, be strong. Be a gentleman.
Posted by Dominic at 11:38 AM No comments:
Email ThisBlogThis!Share to TwitterShare to FacebookShare to Pinterest
Newer Posts Older Posts Home
Subscribe to: Posts (Atom)